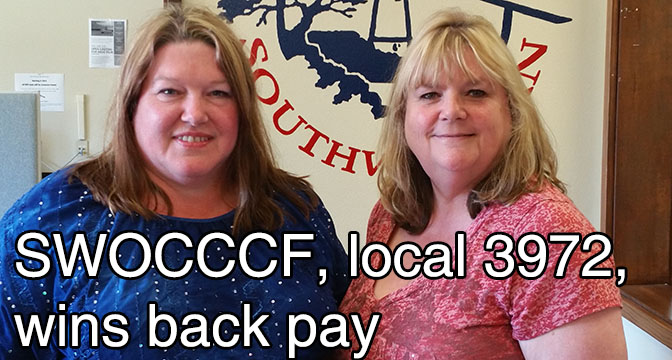 “Unions stand up for workers even if they’re not in the bargaining unit … technically.”

This was the mindset of Southwestern Oregon Community College Classified Federation (SWOCCCF), local 3972, President Vickie Brumit, and the rest of the local’s classified employees when they challenged the classification of five test proctors at their college.

For years, the college hid the proctors from the unit claiming they were not classified employees and not subject to the union contract.

However, that all changed when Brumit decided to take a class at her workplace. She went in to take an exam and noticed her test proctor doing more than originally explained to the local.

“I thought to myself ‘huh that’s interesting’,” Brumit said.

Brumit and her fellow classified employees began investigating the amount of work hours the test proctors performed dating back to 2010. There were five different test protectors from 2010. After a few interviews and some work record research it became clear that the test proctors worked enough hours to be covered by the contract and they belonged in the unit. If the test proctors were represented by the unit they would have received a higher wage, and benefits under the union contract.

“I think this sent a clear message to the college that they need to be truthful in their dealings with us, Brumit said. “It was a lesson to our local that we to pay closer attention to positions.”

Brumit also stressed she could not have done this without the support of her local and AFT-Oregon.

“We were really grateful for the help from AFT-Oregon,” Brumit said. “We couldn’t have done this alone.”